This is the Odyssey Outdoor Activities team

A group of passionate, professional, highly educated guides. Let us take you with safety to the most unique spots around Ithaca island and Kefalonia. 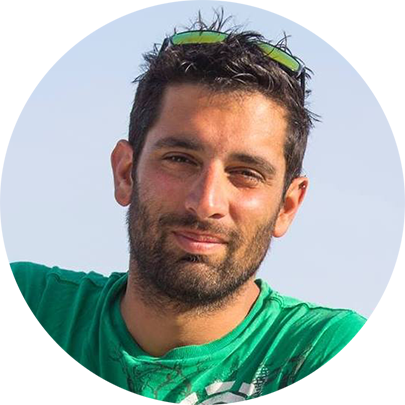 George is the founder, main guide and instructor of Odyssey Outdoor Activities in Ithaca, Greece.

He grew up on the island where he graduated from the local high school. He studied Electronic Engineering (BSc) at the Educational Institute of Athens. During his military service at the Hellenic Navy he trained as radar operator. He spent 3 months in Florida Atlantic University in Fort Lauderdale, Florida working as an electronic engineer for a big underwater acoustic communications project.  He did his Masters in Renewable Energy Engineering (MSc) at Heriot Watt University of Edinburgh, Scotland. For his dissertation he worked for PURE Energy Center in Shetlands and he did many renewable energy and environmental projects.

Finally he decided to return to Ithaca and to set up his own company, Odyssey Outdoor Activities driven by his passion for his homeland and its history.

He was always interested in outdoor activities: He has been sea kayaking since 2006 and he completed the sea kayaking BCU (British Canoe Union) 3 star award in 2011. He has explored almost every islet of the central Ionian Sea with his sea kayak. As a sailor he did two offshore sailing courses (beginners and advanced) at the Hellenic Offshore Racing Club (HORC). He is also a dinghy sailing athlete at Proodos sailing club in Vathy, Ithaca. He also undertook a lifeguard course at the Greek Lifeguard Academy (ENAK). In season 2012 he worked as a sea kayak guide at Ionian Explorers leading day and multi day trips, while he was doing his Divemaster intership at Nautilus Diving Club in Vasiliki, Lefkas. At the end of the season he worked as a Divemaster at the same diving center. Then in December 2012 he became an Open Water Scuba Instructor (OWSI) and an Emergency First Response (EFR) – first aid instructor. After summer 2014 he gained the title of PADI MSDT (Master Scuba Diver Trainer).

In October-November 2014 he undertook one of the most complete and demanding sea kayak guiding courses worldwide, the 6-week “Coastal Guide” training at Sea kayaking Cornwall in Falmouth. He was trained in leadership, incident management, coaching, sea survival, navigation, remote emergency care, expedition skills, surfing and advanced techniques by some of the best sea kayaking instructors, as Jeff Allen and Simon Osborne. He also became a BCU 4 star sea kayaking leader. In March 2015 he applied the knowledge he gained in Cornwall to a demanding expedition. He paddled from Chania(Crete) to Vathy(Ithaca), covering 350 nautical miles in 12,5 days.

Since January 2016 Giorgos is a member of the local tourism council of the municipality of Ithaca. With a strong team of tourism professionals they are trying to advertise Ithaca all over the world. The first two big projects are the study for a big network of paths to attract hiking tourists and the development of the first tourism website of the municipality of Ithaca, www.ithaca.gr .

In Spring 2017 he worked as a commercial diver for a big telecommunication project in Greece.

In November 2019 he completed a demanding sea kayaking expedition from Samos island to Ithaca and Kefalonia. He crossed the Aegean Sea and then through the Coring Canal he entered the Corinth gulf and he paddled all the way to the Ionian Sea. The was a solo and unsupported trip for charity. “East to West” project was designed to collect money for the general hospital of Kefalonia and Ithaca in Argostoli. 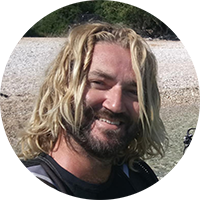 Nick joined the team in 2014 after coming back to his Grandparents island (Ithaca) to reconnect with his ancestral roots and continue his diving education as a Rescue diver under Giorgos Lilas.

Growing up in Australia and having the Great Barrier Reef on his doorstep he fell in love with diving and the underwater world after completing his open water certificate on the remote Saxon reef north of Cairns.

Diving has since played a major roll in his life and has taken him all around the world where in 2016 he completed his Divemaster training in Indonesia and Instructor qualification in Honduras. Now as an established member of the Odyssey team he is responsible for instructing beginner through to Advanced courses and also taking groups of adventures around the island on the brand new 7 meter Rib “Garbis”.

He is passionate about the environment and often organizes beach clean ups around the island. He is working passionately to help keep Ithaca the beautiful so that future generations of locals and tourists alike can continue to enjoy this unique and wonderful island for years to come.

He is fluent in English and German and has a background in Resource Economics from Sydney University. During the season when he’s not out on the water you will find him driving around on his beloved scooter, walking his adopted dog Arapis and enjoying a freddo cappuccino or with friends at the main square in Vathy. 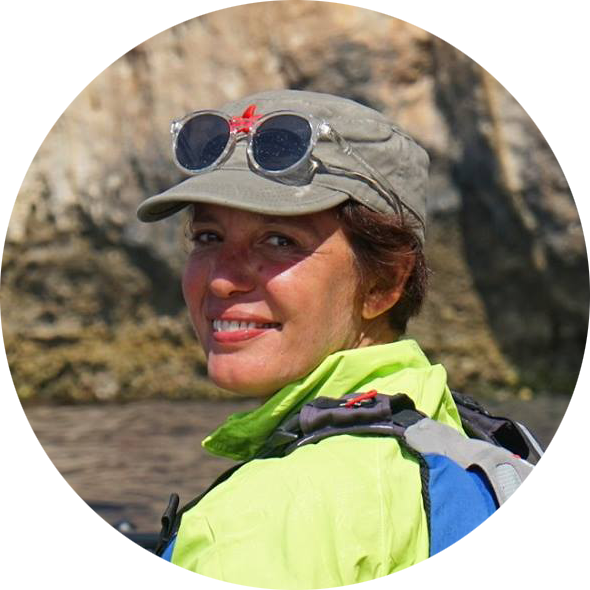 Adriana is from Chile and lives in London but her true summer love is Ithaca! She is an extreme fan of kayaking and Greenland rolling. She organizes courses, trips and kayaking expeditions to beautiful and wild parts of the world. She has the BC 3 Star Sea paddler award, holds First Aid, Navigation and kayak coaching qualifications from the British Canoe (ex BCU). She regularly trains with some of the best UK coaches and is currently working towards her BC Sea Leader award.

She has organised and coached many groups of paddlers of all levels on trips in the Ionians and Crete, Scotland, Wales, England, Patagonia and Greenland. Her next big project is a kayaking expedition to Palawan in the Philippines.

She is fluent in Spanish, English and French and is learning Greek.   At present, she is developing a program for hikers to visit Ithaca and enjoy those breathtaking views from the top of the mountains.

Discovering life outdoors happened not so long ago during a multi-day sea kayak trip to the remote glaciers of Patagonia. Prior to that she’d worked as producer in technology and video games holding leading positions at companies such as Sony PlayStation, Lego and Cygames. Discovering the outdoors and focusing her organisational and business skills in establishing a network of paddlers and hikers, enabled her to pivot her life and find a much happier way of spending her time.

While she is in Ithaca you can usually find her enjoying a fredo cappuccino at the traditional cafe next to Odyssey Outdoor Activities shop (if she is not paddling her dark red NDK Romany). 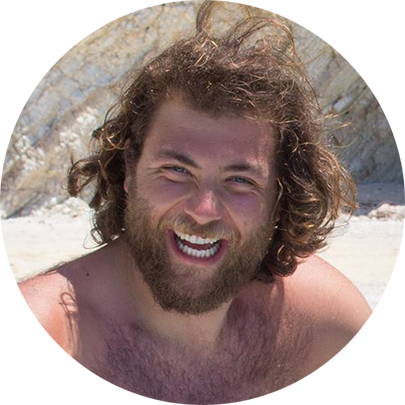 Vaggelis is a passionate local outdoor activity guide who grew up in Ithaca and he is our sea kayak guide, running many day-trips each season and some of our multi-day trips. He is an enthusiast sportsperson who has studied at the department of physical education and sport science of the Democritus University of Thrace in Komotini, Greece. The fact which qualified him to work for Odyssey Sea Kayak Club was that he learn how to roll the kayak in only 15 minutes!!

In search of improving his kayaking skills he decided to leave Greece for six months and through Erasmus student exchange program he undertook some modules at the University of Dijon in France. He tried many racing kayak training programs and he became a stronger paddler.

He is also one of our local hiking guides and he is leading groups all around Ithaca and especially on the North side where he is coming from.

Vangelis can speak Greek, English and French. During his studies he became a basketball referee and a TRX instructor from GR.A.F.T.S HELLAS.

He is an amateur football player at “Odysseas” football team of Ithaca.

Vangelis loves being in nature and among his hobbies is wild camping, scuba diving, swimming, basketball, volleyball and track and field. He is also an artist and his passion is photography, traditional dancing and he is also a great musician. He is playing the guitar as a member of a traditional music group in Komotini and he recently started playing violin. 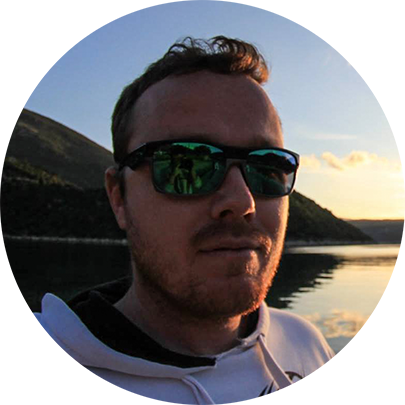 Sotiris is our Divemaster, our boat expert and our tech specialist. He works for Odyssey Outdoor Activities since 2013. He grew up on Ithaca and at the age of 18 he moved to Athens to study computer and network engineering. While he was studying he was working for Marlin RIB Boats representative in Greece.

Since he decided to move back in Ithaca he is working as a yacht skipper at his family business, Odysseus Sea Taxi. In 2017 he opened his own computer and mobile phones service shop but he is still leading some of our dives and works as a commercial diver assistant. 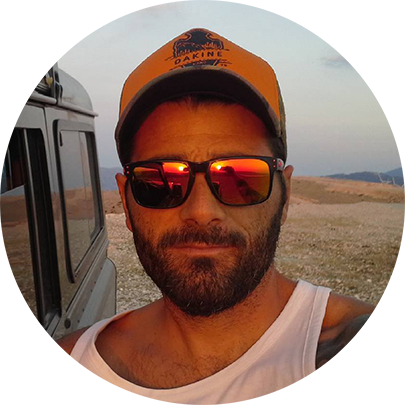 Mr. Potamianos is our brave partner in Kefalonia. He is running “Outdoor kefalonia” which is the most complete outdoor activities company on our neighbor island. Giorgio has strong roots in Kefalonia, his family’s name is registered in one of the oldest documents dating from 1262.

He has been involved in adventure sports and activities since the age of 15 when he started walking, caving and learning about the historical background of Kefalonia. He became a volunteer with the fire service at the age of 16, which later lead to a full time position as a driver (fifth degree professional driver)- firefighter, for 6 years. He trained in the army with the Special Forces (1998-2000) in the “Mountain assault units”,where he was also a medic. After his army training he trained and became an expert in mountaineering, rock-climbing 7b- and ice-climbing 4+, 5 and as part of his training, he travelled throughout Greece to places such as Meteora, Mount Olympus and in Europe (La Grave, Fournel, Val d’aosta) to perfect his sport. He is one of the most experienced divers of the island and he is responsible for the department of diving at the sailing club of Kefalonia. He also worked as a diver at the reconstruction of the historical bridge of Argostoli.

In 2005 he designed the new footpath system for Ainos Mountain’s national park. These paths were opened to the public in 2011. He has attended and completed various training courses and seminars based around his profession including areas such as the protection of yourself and the safety of others. As a kayaker he is an ISKGA coastal and BCU 4* sea kayaking guide (trained by Sea Kayaking Cornwall). In October 2013, he crossed the Adriatic sea, paddling 700 nm from Kefalonia to Venice in 34 days. He also undertakes rope access projects which involve accessing places in which the usual means of ladders or scaffolding cannot be used and ropes are needed, usually very tall, deep or narrow places. He turned his numerable skills into a business in 2008.
Contact him for any adventure around Kefalonia. If you have a special request for Ithaca, as climbing, abseiling or caving we can arrange to bring this outdoor activity legend to Ithaca only for you.

Our mission is to deliver high quality outdoor activity services to our customers.

We want the visitors of Ithaca island to feel with us like locals and experience the real character of the island. We always design our trips based on the real history of the island and we try to connect our adventures with the mythical travel adventures of king Odysseus. 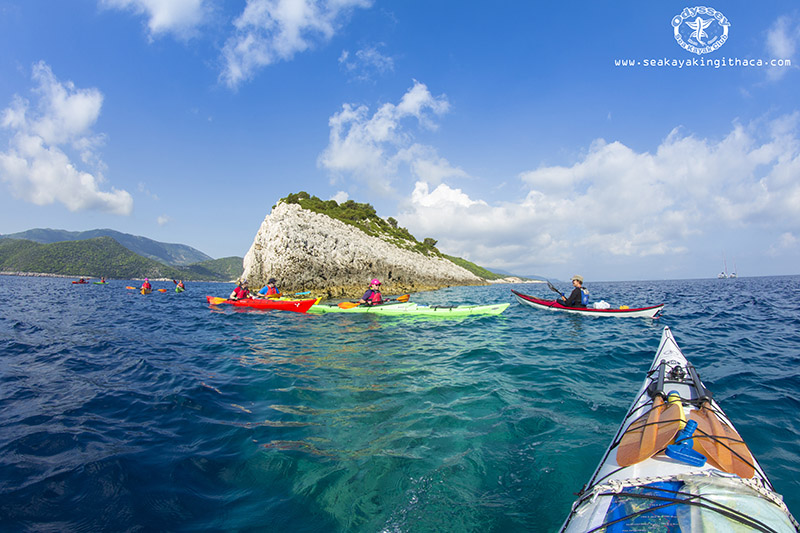 Choose between the most unique trips that you can do on Ithaca or arount the island:

We always keep high standards during our trips and we try to offer activities with: